We are seeking advice about the best way to tackle the issue of Dolphina Park, Sharm.  It is not easy because it appears that whilst zoos in Egypt maybe under the control of the Minister of Tourism, private dolphinaria may be controlled by other Ministries. Once we find out the most appropriate authority we will contact them and maybe create a petition, but we need to carry out further research.

Dr Ingrid Visser explained that things may not be as straight forward as they seem, for instance whilst the issue of Steven, Maria and Stacha having no teeth may look insurmountable, she cites examples where wild animals have lived well despite having similar issues.  An orca died in New Zealand as a result of a stranding, her teeth were worn to the gums but yet compared to the others in the pod, her blubber was the thickest - clearly she fed well.  There are also examples of bottlenose dolphins in New Zealand with broken jaws and sperm whales with curved jaws such that they cannot close their jaws and all appear fit and healthy.  Dr Visser stresses that it is specific to the individual and those rehabilitating them whether they can overcome these issues.  It is very much the case that each dolphin should be looked at separately to assess their potential.

Dr Visser went on to state that "limited", "supervised" or "assisted" releases should not be ruled out because quality of life can be improved in different ways.  The famous example of Keiko (star of Free Willy) was taken on daily "open ocean swims" - a vast improvement to his life in a concrete tank. Sometimes the answer might be living in a bay and "provisioned with food" again like Keiko.  The point that Dr Visser makes is that dolphins can be moved out of unnatural tanks and into a more natural environment such as seapens.

Clearly our goal would be to have Steven, Stacha, Maria and Mizo assessed by a team of experts who can work with the owners of Dolphina to make the lives of the dolphins as good as is possible.

We may in future raise funds to have materials printed and distributed in Sharm and donations would be useful - but we need to know what is necessary and how much before this can be set up.

We have handed our report over to Marine Connection who were very successful in the past with the former facility called Dolphinella.

We have contacted Born Free Foundation and ABTA and passed these details on to them for action. 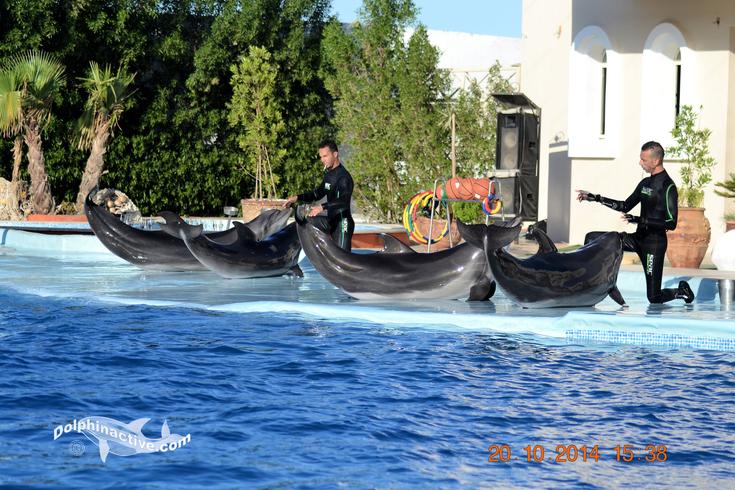