It has been a struggle to name this section - the health and safety considerations in Dolphina Park in Sharm el Sheikh, Egypt are not of a similar standard to that which we would expect in Europe.

The Park is new, and it seems unfinished yet I understand that it is at least a couple of years old.  There are construction cones and uneven pathways with crumbling concrete.  The staff did sweep away the water after the show but not before I saw a small child throw a chunk of concrete into the pool.  For animals so deprived of stimulation I hoped that the dolphins did not find and eat this as many captive dolphins are fond of eating new things. If this had happened the consequences for the dolphin could be immense.

​At no point were the participants in the Swim-With experience asked if we were ill or injured. Given that we were about to submerge in water where dolphins defecate and urinate I would have thought that to be an important matter. We were asked to remove jewellery and if it wasn't possible it was suggested that the item be taped up - I cannot say if this was done but the effort was made.  We were not asked to shower or even just wash our hands before or after the encounter.  We were not offered wet suits although I have seen photographs of guests in suits.  We were asked if we required life vests but not compelled to wear them.

At the outset of the 15 minute session we were told not to touch the blow hole or eyes of the dolphin but anywhere else was fine.

During the show the trainers were observed blowing their noses and washing their hands off in the water. One trainer performed a trick where he held a whole fish (the only whole fish fed to any of the dolphins) in his mouth and the dolphin jumped up to take it from him. 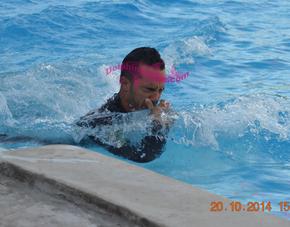 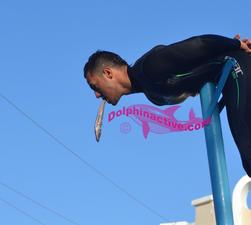 None of the pool area is railed off from the public and indeed one young child was seen climbing on the building debris of the future penguin pool.

There is nothing to stop a member of the public falling into the dolphin pool.

One woman fell heavily on her arm as she left the slippery poolside after Steven's "kissing session".

Facilities inside for humans are good and clean but no showers were available for after your encounter.  I would like to show you this image - once seen, never forgotten! It's obvious it happens but we never think about it - but we should, shouldn't we? 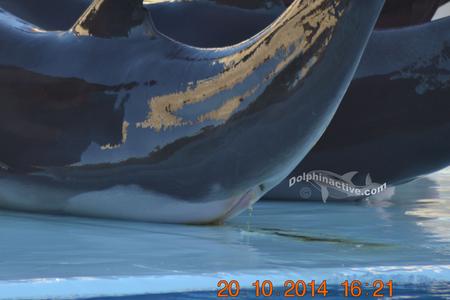 During the Swim-With encounter the guests were in the water alone with the dolphins.  The trainer was in a seat - very casually conducting the session and behind him a photographer, a videographer and another fully clothed member of staff.  I couldn't see what emergency plans were in place should something occur in the water with the animals or guests. 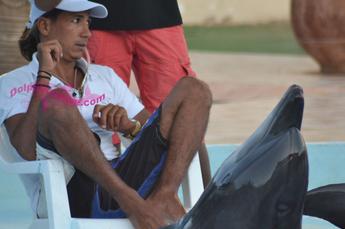 Dolphina Park, Sharm el Sheikh, Egypt, opens at 9am and closes at 5.30pm, there is an hour for the show and we were told that there is no lunch break.  This means that these dolphins are working very long and hard every day and with only a 20 minute rest before the show begins.  We paid £15 each for the show and £65 for the Swim-With encounter - there are eight guests for each pair of dolphins, every 15 minutes and DVDs and photos are for sale after the sessions. We are also now aware that on Sundays there are 3 other programmes on offer to guests about which we are gathering information. These animals are working 7 days a week.

In our opinion this is not about education, conservation, research or animal welfare because at no time nor at any place were these topics discussed or displayed.  Our view is that these shows and experiences are about exploiting these dolphins shamelessly and each time a guest hands over their money they support and condone this cruelty.

Back to DOLPHINA PARK
Forward to ACTION

Chapter 9 of the Handbook of Marine Mammal Medicine by Leslie A. Dierauf is all about diseases and micro-organisms some of which will affect both humans and cetaceans, some are species specific whilst others may cross over to some extent between the species. It suddenly becomes far less attractive an activity when you read that amongst others infections, cholera,  gastroenteritis, vomiting, renal failure, respiratory disease (trainers mainly), septicemia, skin lesions, herpes infection, candida, fungal yeast infections, various inflamations or even influenza are all possible.  Sure, unlikely but if your immune system was low, or if you had a point of entry into the body, say an abrasion or cut, then the possibility exists.

Dolphina Park staff never discussed nor warned us of any of these hazards so it leaves the unsuspecting public oblivious to the potential risks nor does it allow them to protect the animals from our illnesses. There would certainly be a lengthy risk assessment carried out and the warning signs would be everywhere in a similar environment in the UK - but we seem to leave all our responsibility at the airport departure gate.

There ​are certain illnesses that are transferred between species - this is a major method!

We were not asked to shower or even just wash our hands before or after the encounter.​