One of the most shocking sights of our visit was to realise that the adult dolphins have no teeth.  NONE! This is not a case of they have lost some or that the teeth are worn away - they have no teeth.  The only possible explanation we believe is that they have been removed.  If their teeth were broken or worn away there would be some part of the jaw with teeth, and looking at the pool and surrounding areas it would be hard to see what the dolphins could bite to cause them total tooth loss. Obviously they were previously living in another pool at the Dolphinella facility in Hadaba, Sharm el Sheikh and I do not know what that was like but I imagine it was comparable to this one as footage on YouTube shows. I cannot imagine how distressing the procedure for removing a full set of teeth from a dolphin must have been.  When asked why the dolphins had no teeth the trainer simply stated that they had "lost them".  Other appalled guests have been told that they were "removed for guest safety" or in one case that dolphins' teeth "come down when it is time to feed"! (I believe this was from a rep rather than the dolphinarium staff).

The calf, Mizo has all his teeth at the time of our visit in October 2014.

​Throughout the show the dolphins received small pieces of fish from small buckets. Fish pieces would lose water content even quicker than whole fish - and don't forget this is in the middle of a desert. The treats were not all that regularly dispensed and were very scarce during the Swim-With interaction. Given that Swim-With interactions make up the majority of the dolphins' day I wonder how much food they are receiving.  I am not a vet so cannot comment on the weight of the animals. 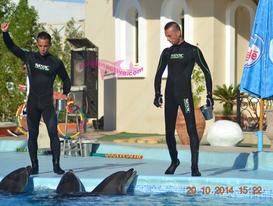 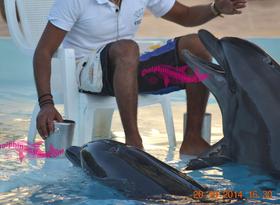 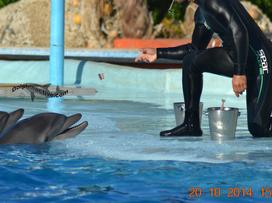 When we arrived at Dolphina at just after 3pm, two dolphins were "logging" at the end of the pool. Logging is the term for floating motionless.  In the wild dolphins seldom stay still and it is generally accepted that logging is a sign of boredom in captivity.  The other two dolphins made constant and repetitive lengths of the pool, swimming on the surface to their logging pool mates then diving down and swimming underwater to the other end. This behaviour is like a caged lion pacing backwards and forwards and is totally unnatural and alarming. Sadly way back in 2005 this was also reported.

The adult animals all have evidence of "rake marks" which are caused by the teeth of another dolphin. The females are more marked than the male.  These rake marks could be caused by boisterous play, attempts at domination or marks from defensive behaviour. 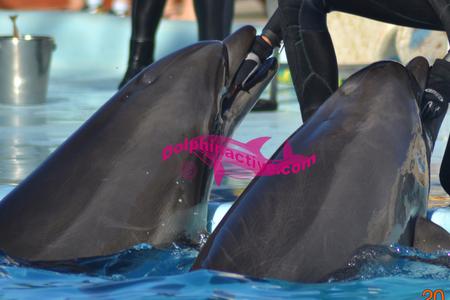 Maria's eyes appear to be not as wide open as the other dolphins and certainly her eyes are cloudy.  In researching the possible causes for this we discovered that it might be due to low salt levels in the water, use of chemicals such as chlorine, stress or ill health or cataracts.  It is not possible to say whether Maria's vision is impaired.

The final area of concern is that the females have small discolourations on their bodies which may or may not be old dolphin pox scars.  Dolphin pox is a condition of the skin, it is not contagious to humans and there may or may not be a correlation to stress and environmental conditions - so the jury is out as to how serious this is - the point of reporting it here is to give you a full picture of the dolphins' health and welfare and if it IS related to stress or environmental conditions then we should be aware of its existence.  As I have noted I do not know if these marks are poxvirus. 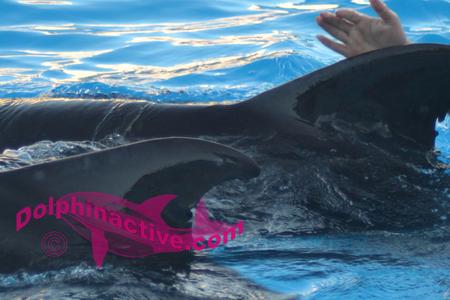 There are marks on the bottom and ends of the dolphins' rostrums.  Steven appeared to have a sore on the end of his rostrum.  One can only wonder if the rough soles of the trainers' boots have caused these sores as the skin looks ragged. 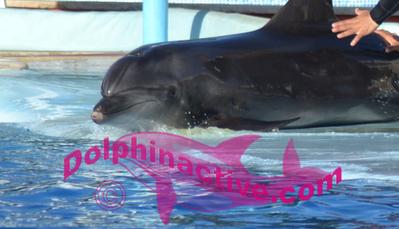 We went to Dolphina Park because there are reported acts of abuse against the animals.  I have followed up the accounts with some of the guests who witnessed it and I believed their accounts which are available in the Park's reviews on Tripadvisor.  However as we did not witness any physical hitting of the dolphins ourselves I am only mentioning it here as a report.  BUT, we did witness one of the trainers standing on the rostrum (beak) of one of the dolphins, we think it was Mizo the calf and we repeatedly saw the trainers using their boots to press down on the tips of the rostrums.  One trainer did it more and apparently with more pressure than the other. 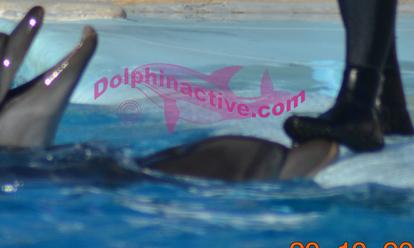 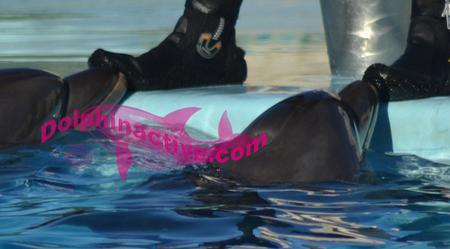 Back to DOLPHINA PARK
Forward to SHOW BEHAVIOURS
View on Mobile