Convolutions = intelligence!  Dolphins, primates and elephants are second only to humans in brain complexity.  Marine parks will tell you this repeatedly as they make their animals demonstrate with learned tricks and behaviours.

Does the irony of this fact not disturb us?

Eyes: Dolphin eyes are amazing, they are designed to

see both in air and underwater.

​Marine parks provide pools that are artificially salinated, filtered and worse yet, sometimes chlorinated. This can lead to corneal clouding as observed in one adult dolphin in Dolphina Park in Sharm el Sheikh. 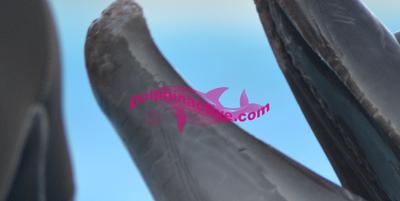 Teeth:​ Dolphins don't use their teeth to eat, they are used to hold slippery prey.

​The adult dolphins in Dolphina Park in Sharm have no teeth. The reason for this is not shared with the concerned or curious public and different explanations have been heard.  It would be hard to comprehend a medical procedure to remove teeth that did not cause stress and misery. 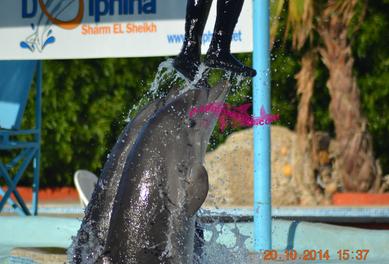 Sensitivity: Dolphins are sensitive to touch, indeed their rostrums (beaks) are used to feel out prey. Their eyes and blow holes and the whole mouth area are particularly receptive to contact.

There isn't a single dolphin show in the world that doesn't try to wow its audience by the "rocket hop" where dolphins push the weight of an adult human trainer out of the water on those sensitive rostrums.  Indeed there is evidence of bruising and sores on these areas of numerous marine park dolphins (see above) 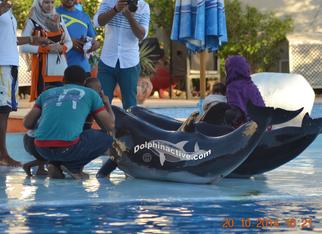 Internal Organs: ​An animal the size of a dolphin with its muscular body is a heavy creature, the average adult weighs 150-200kg but salty sea water supports this mass.

Part of the show and the experience for an audience is to see dolphins beach themselves and to have a souvenir photo to remember the moment. Spare a thought that out of the water the weight of the dolphin crushes down on its organs and in the wild a healthy dolphin would not willingly beach itself.

Much of the information above is deliberately taken from the seaworld.org website. Given that they promote themselves as the experts in captivity, their information here, an anti-captivity site would be a reasonable way to look at captivity. 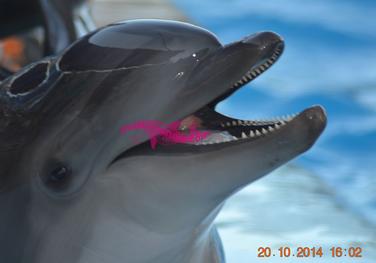 Hearing: Dolphins have acute hearing both in air and underwater. A human has a range of 0.2-20 kHz, a dog averages 40-60 kHz but a dolphin's range is 40-100 kHz! Sound travels about 4 times faster in water than in air.

​Dolphin shows are noisy affairs, there's all that music, narration, whistles, shouts and cheers and rhythmic clapping and when the show is over, the noise continues from the pumps and filtration system - it is a stressful place to be for an animal with a keenly developed sense of hearing.

Back to DOLPHINS
Forward to WILD vs CAPTIVE
View on Mobile