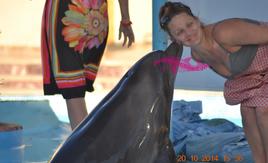 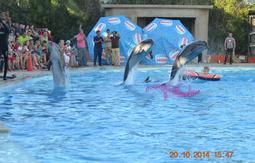 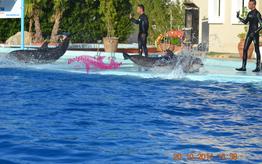 Why is it so very bad for the animals to perform tricks and behaviours? To quote an eminently respectable marine mammal scientist, Dr Naomi Rose,

Whilst conducting research we found a report compiled by Marine Connection describes the show and the Swim-With experience as witnessed in December 2005.  I had not seen this report prior to my visit and it describes almost identically the show and Swim-With experience that we observed and participated.  These dolphins have been doing the same show, the same routines 6 days a week since before December 2005 - that is more than 2,808 days of the same activity.

We know that "beaching" repeatedly over many years is both unnatural and damaging to a dolphin as their considerable weight is not supported by water. It is harmful for spine and internal organs.  Dolphina's animals spent a long time out of the water - at the end of the show we noted that Steven and Mizo were beached for approximately 15 minutes.

Kissing is another area of concern.  Stacha and Maria were made to kiss the guests twice during the course of a 15 minute encounter.  Stacha has an alarming habit of sticking her tongue out to lick the guests' faces.  At no point were we asked or advised to clean the face before or after the encounter nor remove make up - and there was a guest there with practically full stage make up!  Steven was on his fin tips for the entire time it took to get through posing with about 25 women for photographs. 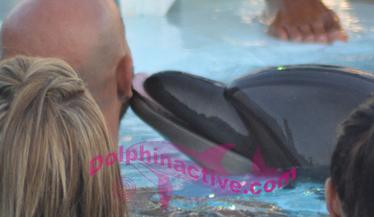 What show would be complete without giving rides to the trainers and "rocket hopping" them out of the water - we began to think the trainers were not strong enough to exit the pool without a hefty push from the dolphins. The dolphins pushed and pulled and carried the trainers a lot and everyone got a fin pull and a dance in the Swim-With experience.  Hardly a natural behaviour. 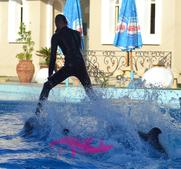 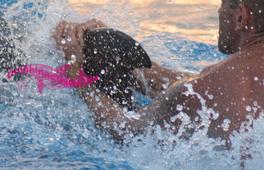 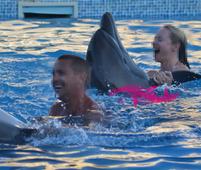 ​There was also the usual playing with props and jumping through hoops etc even a session where Steven held a paint brush and the trainer moved the paper around and produced a painting of a smiley face!  What are we learning? Well for starters the trainer is not suited to a creative career either. 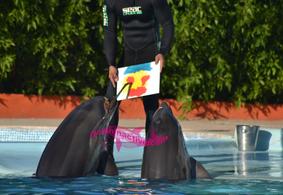 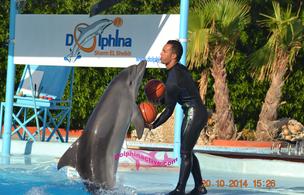 One of the most abhorrent sides to captivity is the degradation of an animal who is intelligent and emotional. To see a dolphin "sing" for the audience, perform clownish behaviours and splash around inanely is a tragedy and Dolphina did not break the mould.  We left heart broken and angry for if you ever encounter a free ranging dolphin the moment is unforgettable and worth so much more because it is the will of the dolphin to interact naturally with you.

​Dolphina Park in Sharm el Sheikh, in their recently launched website offers Trainer 4a Day, Diving with Dolphins, Therapy.  We assume that these are carried out on Sundays the only day that the show and swim-with sessions are not offered.  The Diving is apparently suited to people with no experience.  As a SCUBA diving instructor, I can think of very few other activities less suited to beginners than putting them into SCUBA gear in a pool with four very large dolphins!

There is no evidence to support the claims that Dolphin Assisted Therapy works or has any benefit.