Dolphina Park is about 40 minutes drive from the main resort area of Na'ama Bay on the Sinai Peninsula in Eygpt.

Given that this park is a brand new, purpose built facility - with no buildings nearby, it seems a shame that more effort wasn't put into making the pool for the animals larger.  We estimated that the pool was no more than 30m by 10m and were told it was 6m deep.

There is one tiny escape pool accessed under a bridge and over a ledge which the tourists use to stand on for their Swim-With interaction.  Given that on the occasion of our visit,  there is no obvious way to block off the pool and that it is in full view of people then it would be hard to call this a "refuge".  On the other side of the main pool there is another bridge with access to another narrow pool which we were told will be an observation pool from a restaurant.  Currently that pool is blocked off and empty. 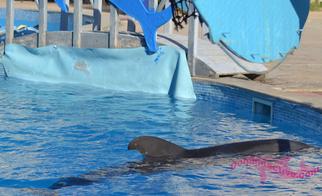 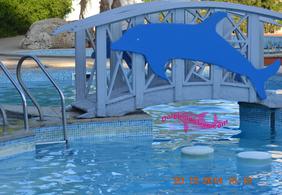 The pool has no permanent shade over it, although at the time of our visit, 3pm, the pool was shaded by the seating stands.  Presumably however, during the morning the pool would be in full sunshine.  Remember, this facility is in the Sinai Desert and temperatures in the summer can hit 45° Centigrade!  There are high wires that run from the back of the covered seating stands over to the building on the opposite side and I imagine that the pushed back pieces of canvas is an attempt to provide some sort of cover.  In any event they are not on every wire so would not provide full shade in their current form. There is a record of a campaign by Marine Connection way back in 2005 that raised the issue of shade in the former facilty which resulted in some being provided but yet those lessons do not appear to have been transferred to this new facility. 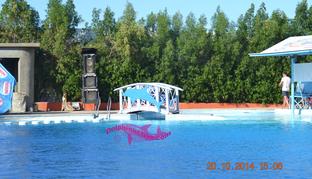 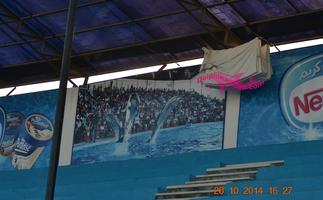 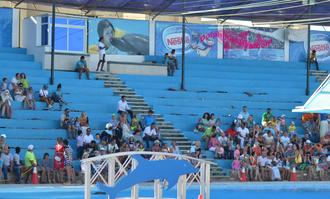 Obviously we didn't whip out a water testing kit and can only state that the water appeared clear, cool although guests could be in the water in swimsuits only and wetsuits were not required, and slightly salty (we weren't about to drink a glass of water that 4 dolphins defecate and urinate in!) I would say however that we observed a scum line around the pool. We also observed that one dolphin, Maria had cloudy eyes and upon researching this we discovered that chlorine is often cited as a reason for corneal clouding, along with health and stress issues and insufficiently salinated water. Another reference might also suggest that this might be cataracts. Unfortunately I was dismissed after raising the issue of teeth and had no opportunity to ask about Maria's eyes. 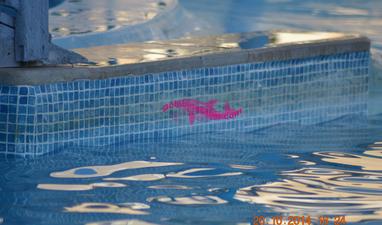 Back to DOLPHINA PARK
Forward to HEALTH & WELFARE?
View on Mobile