The Source of the Dolphins

Dolphins in captivity are sourced in three ways.

Rescues: Where a rescue has taken place but rehabilitation has not been successful the animal cannot be released and so captivity offers the best solution.

​Captive Breeding: Often cited as an ethical alternative to wild capture but we should not be fooled. Captivity almost always throws animals from different pods, areas even oceans together and so breeding these animals is not natural. Increasingly dolphins are being artificially inseminated which involves the manual collection of semen and impregnation of females, often too young to breed. The offspring suffer premature deaths, frequent rejection by inexperienced mothers and life in a dysfunctional "pod". There is always the chance of unnatural in-breeding.

Wild Captures: These can be taking a single animal from the wild or several. The latter often involves cruel, inhumane Drive Hunts particularly in Japan, the Solomon Islands and the Black Sea.

For more info on Drive Hunts 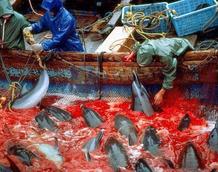 Forward to CONDITIONS OF CAPTIVITY
View on Mobile